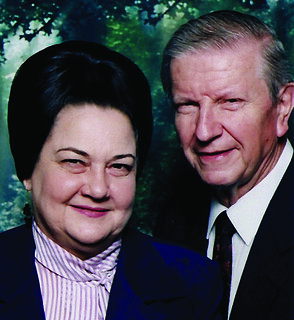 In 1962 our young Choate family moved to the country of Pakistan to begin the Lord’s church in Karachi, a huge city on the Arabian Sea. Following five years of work with several young and developing congregations, we turned the responsibility over to replacement missionaries and moved to Colombo, Sri Lanka, located in the Indian Ocean, just off the southern tip of India.

A small congregation of approximately 30 baptized believers was left in Colombo in the hands of others when we moved to New Delhi, to start the church in the capital city of the densely populated country of India.

Five decades have flown by, and there have been many wonderful and exciting changes in the church/world situation during these years. Of course the population of the world has mushroomed, while the number of missionary families in foreign fields is less now than 50 years ago. But the spiritual picture has also changed, and in very encouraging ways!

How is that? Fifty years ago the Lord’s church existed in few countries of the Indian Sub-continent and Asia. Today there are some Christians in almost every nation, and a healthy nucleus in numerous countries. In many cases, today, missionaries are working with third- and fourth-generation Christians who are now the primary ones carrying the Message, rather than foreigners. What a wonderful thing to have local brothers and sisters to work with and through!

Vision for the Work 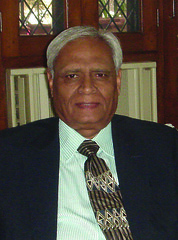 Looking at India’s huge population, on our arrival there, it was apparent to us that in an entire lifetime spent on the mission field, we, as a family, could make very little dent in the spiritual needs of so many people. So we prayed and looked for more effective means.

In 1975 Sri Lanka was on the brink of bankruptcy. Part of the president’s solution for more foreign exchange was the opening of her powerful radio stations to foreigners for religious broadcasting, in exchange for dollars. “The Giant of Asia” was certainly a tremendous answer to prayers! Where, previously, new contacts had to be made through Gospel meetings, limited newspaper advertising, and friend-to-friend, with the voice of radio it was now possible to speak to the masses of Indians who listened faithfully to Radio Sri Lanka for “reliable” news and for entertainment!

Can you imagine the excitement of the radio speakers when they went to their post boxes and found them literally stuffed with cards and letters? Multitudes of homes were now open to the Gospel, and the resulting demand for Bible Correspondence courses was overwhelming!  Through the years that have followed, many souls have been won and many congregations have been established. 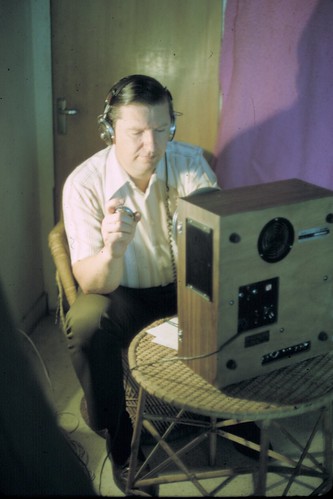 What a success story this combination has been! With the passing of time we  developed radio programs in five of India’s major languages, spoken by literally millions of people. We grew to have 17 weekly programs, using speakers who had been Christians since the very early days of evangelism in India, men who were seasoned in the faith, with a sound knowledge of God’s Word. The programs cost $143.50 each — a small price for a voice that reached the entire sub-continent, with more than 1.4 billion people!

Then the Blessing of Television

While the government of India would never allow religious broadcasting on its radio stations, with the advent of cable TV our emphasis has largely switched from radio to television.  We now have telecasts in four of India’s major languages.  Again, we are using men as speakers who have been Christians and evangelists for many years, so we have confidence in their knowledge of the truth and their ability to get it across to viewers.

Literature Is a Secondary Tool

We have printed literally hundreds of books, usually 2000 to 5000 copies each, in India, including the manuscripts for the radio programs in the various languages, and many other books written by American and Indian brethren. These have been offered to radio listeners and to TV viewers, and to any others who request them — free of charge. Tracts and Bible courses are also offered, and monthly magazines in six local languages. All of these mass media tools, coupled with correspondence, Gospel meetings, and personal studies have done much to develop and strengthen the brotherhood throughout the country. All major cities and many minor cities and villages now have congregations of the Lord’s church. 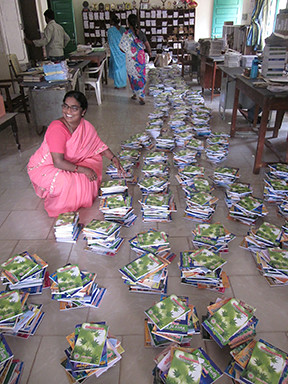 When we first went to India, there was no church in New Delhi and the few that existed in other places were less than five years old.  What was an infant then has grown during these years to comprise churches and Christians of all ages!  We are working now with third-generation Christians in many places!  What an exciting thing it is to see this growth and maturing of the church.

In this era, the major work of foreigners is to teach in training schools and in seminars, to supply the in-depth lessons that are needed for the church.  We are thankful to see Indian brethren assuming more of the local teaching and financial responsibilities, because this is necessary if the church is to mature beyond the need for outside help.  While growth in these areas is being achieved, it is not possible yet for the Indian churches to fund the mass media tools that are needed if nation-wide evangelism is to be continued.  Outside funds are necessary to pay for the radio/TV time, and for the great amount of printing that needs to be done in order to provide follow-up tools.  This remains, at this time, the responsibility of the American church.

Tremendous Outreach of the Work

But India is not the only country needing mass media tools to enable the local church to stabilize and evangelize. Seeing those needs, we help to supply study books for numerous other countries, either printing there or shipping materials from India or the US.  These include many nations in Africa, Asia, and India’s sub-continent.

These books are valuable beyond comprehension to American Christians. Accustomed as we are to freely ordering whatever we need from an array of Christian bookstores, most of us do not understand the plight of Christians and seekers in other countries where there are no bookstores from which to order. In those places, even locating a place to buy a copy of the Bible may be extremey difficult. But there is absolutely no place to order study aids written by Christians, beyond the occasional Bible correspondence course. For twenty-five years we have printed what we could, where we could, when we could — depending on the availability of funds — and these materials have been supplied freely to those who had a desire to study and grow. Much more of this work needs to be done. 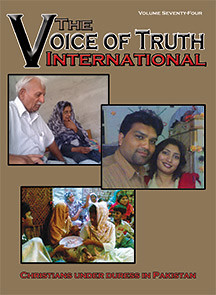 As with reference and other study materials, American Christians are extremely blessed to have an abundance of excellent magazines and periodicals to read. In most of the rest of the world, the church is too small, too young in years and development of talents, or too poor to produce its own magazine. To help fill that void, we began printing The Voice of Truth International, a book-type magazine with several categories of sound and well-written articles by respected men in the church. It is sent all over the world, free of charge.  Besides English, other language editions —  Tamil, Telugu, Hindi, Malayalam, Marathi, and Paite — are also printed and made available at no cost to the recipients. We hope it will be possible, also, to resume printing in Spanish, but we need help with the translation and layout.

How are these editions funded? We urge American Christians to use The Voice of Truth International here in the States, as an evangelistic tool.  This enables us to use what would be “profit” to cover the printing and postage bills for these magazines for foreign consumption.

The Voice of Truth International can be kept in public waiting rooms and used as “take home” materials for those involved in home studies with contacts. Congregations that give $25 per month receive 35 copies of each issue, for distribution within the congregation or in the personal work program. Individual subscriptions are $15 per year, or $25 for two years. 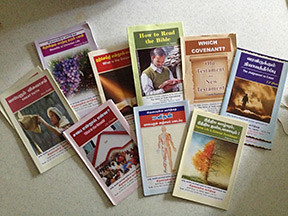 Our English tracts are translated into local languages.

Our newest tool is 106 tracts, designed to impart truth to unbelievers, to the denominational world, and to maturing Christians.  These are available here in the States, and they are also being translated and printed in India in local languages.

Coupled with local Christians for follow-up work, World Bible School teachers have done a tremendous job of sowing the seed and of helping to harvest it in many foreign fields. We realized the need for on-going materials for their students and began to print here in the US some of the study books we’ve printed overseas. At the present time we have more than 25 titles on a variety of subjects, by a variety of authors, and in several languages.

Regardless of the size or cost of printing these books, they are offered to WBS teachers, to people involved in personal work programs, and for jail ministries at the often-subsidized price of $1.50 a copy. We have made this another way of serving the church and of being instruments in spreading the Gospel.

The Growing Team of World Evangelism

From 1983 the Wayne Barriers participated in the work on a part-time basis.  Since his retirement, Wayne and Janet, along with their sons, Jeremy and Joey, have devoted full time to the programs already developed, as well as adding to them.  When J.C. had the recurrence of colon cancer in 2005, we knew that our time of working overseas was at an end.  Providentially, God brought the Jerry Bates and the Louis Rushmores to live in Winona, to continue the work done here, to report to supporting churches, and to make those necessary overseas trips. Louis Rushmore is the current editor of The Voice of Truth International.  Dennis Larson keeps the programs for our data files updated.   Each of these vital co-workers has his own section under “Team Members”.  Please go there to learn more specifics about their lives and works, and to read their updated reports.

In all of these areas, it is possible for us to do only what brethren will enable us to do with their contributions to the work. Our lives have been spent in these fields of service, and we want to do more — not less — in these latter years. We ask you to look at our record, to see that we have used funds sparingly, and have invested them in lasting tools that will continue to serve after we are gone.

Please be a part of this work. Pray for us, support us, and help us bring hope and life to those who love the truth.